7 Incredible “Game of Thrones” Cakes (and a Pie, Too)

Home / Inspiration / 7 Incredible “Game of Thrones” Cakes (and a Pie, Too)

7 Incredible “Game of Thrones” Cakes (and a Pie, Too) 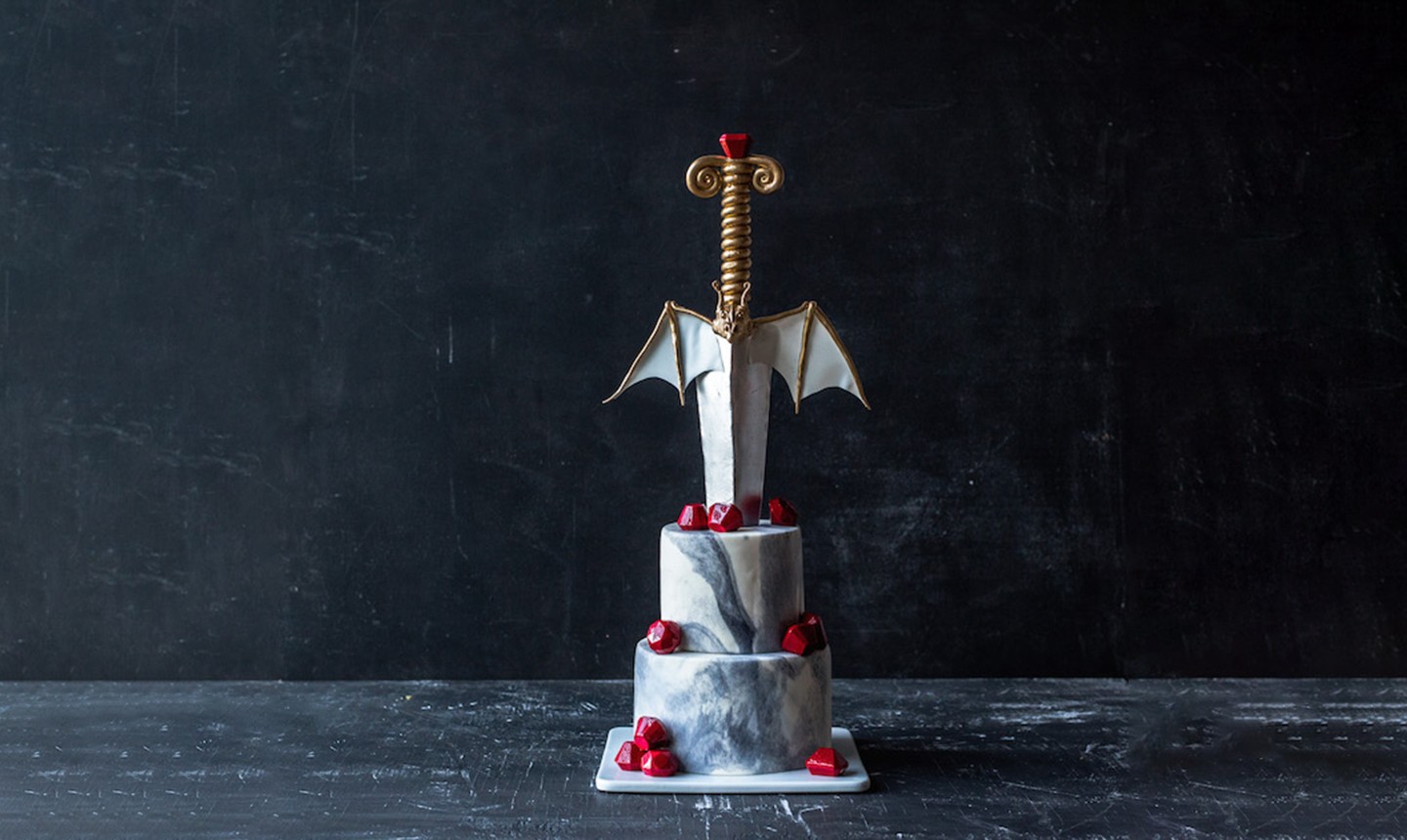 You can count on Joshua John Russell to dream up a show-stopping design! Here, he pays homage to George R.R. Martin with his marbled fondant cake, topped with an unmistakable sharp sword. Watch him make it on Man About Cake ! 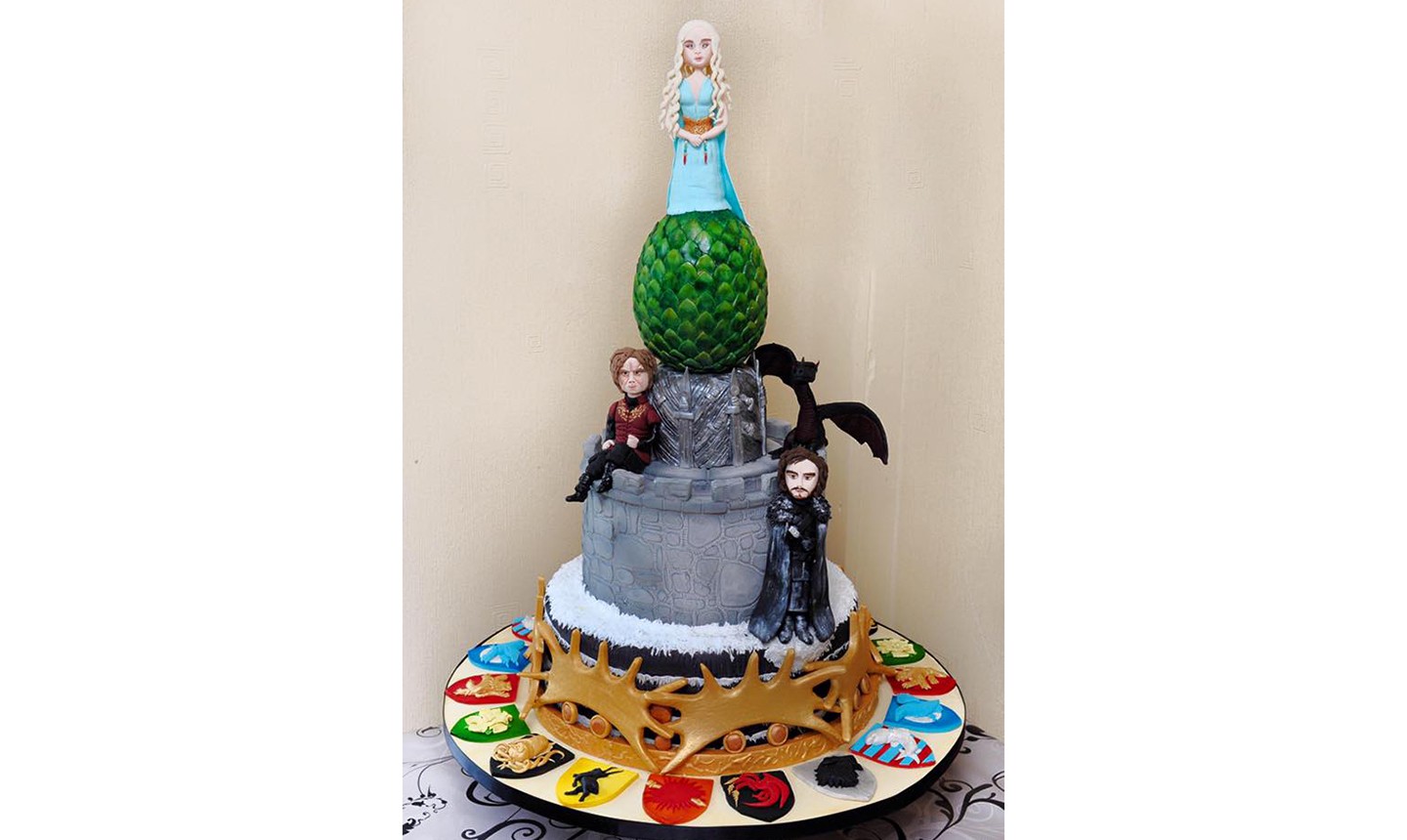 U.K.-based Mel’s Amazing Cakes used a combo of fondant and gum paste to create some of the show’s most popular characters, which are perched atop tiers decorated like a dragon egg, the Iron Throne, castle gates and golden crowns. Royally impressive! 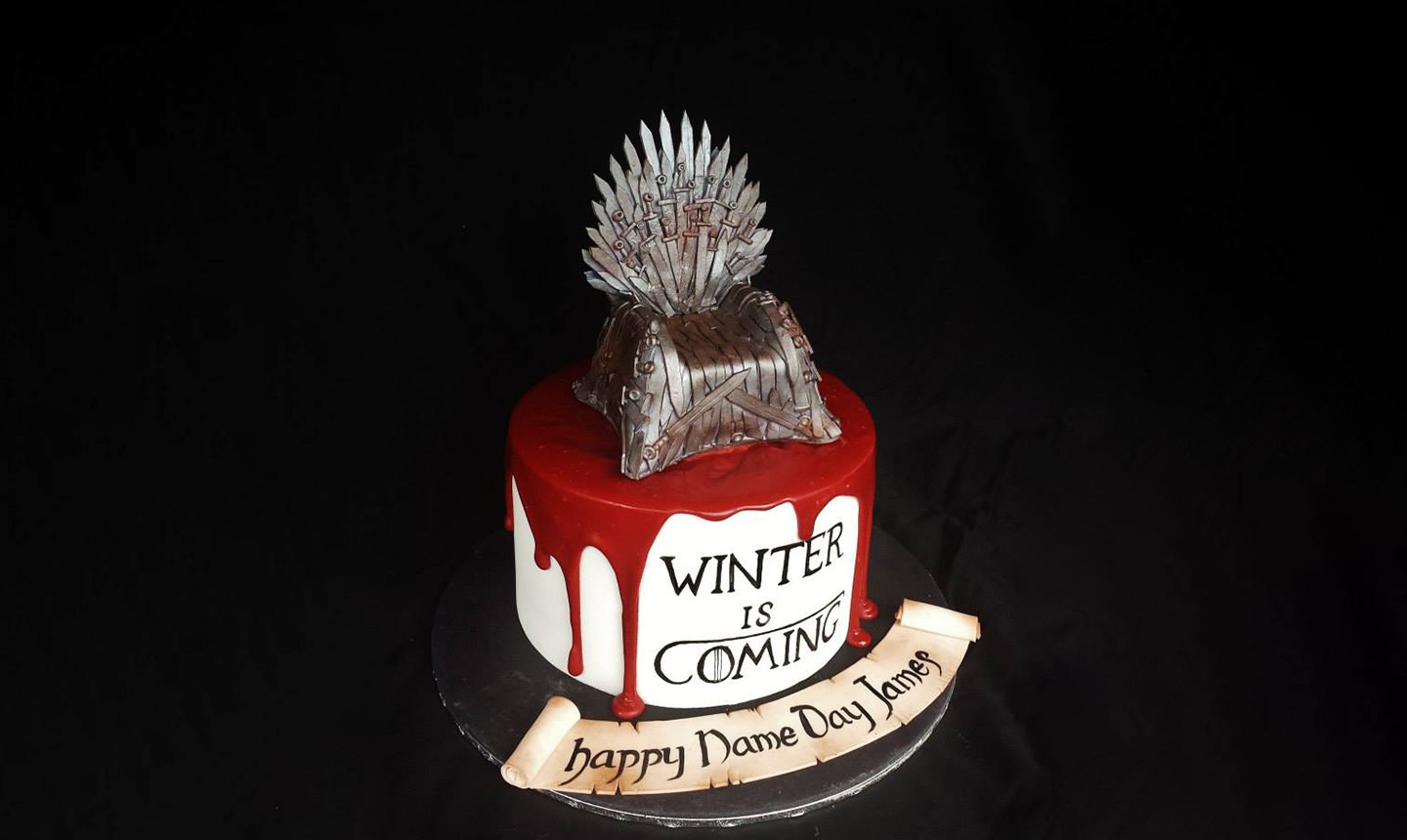 While it may look like this cake is topped with a metal sculpture, it’s actually a completely edible homemade Iron Throne topper. This fondant marvel by Cindy’s Cake Creations in Melbourne, Australia, required hundreds of tiny swords sculpted one by one, which “wasn’t as fun as it sounds,” according to the baker. But if you ask us, it was sooooo worth it. 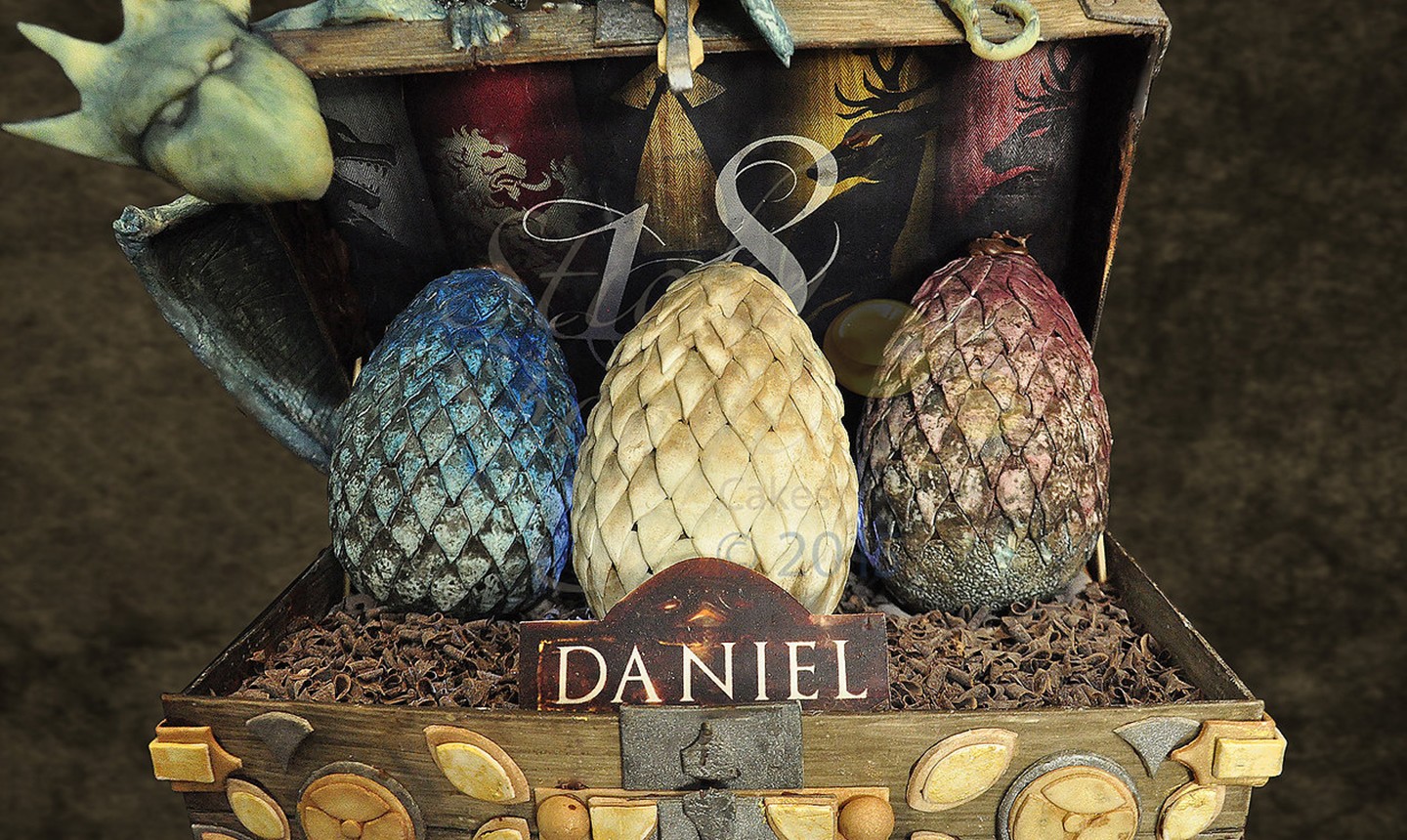 Believe it or not, aside from a few supports for the lid of the chest and the dragon wings, this creation by Sticky Sponge Cake Artists in the United Kingdom is entirely edible. The sword and chest are made from hardened sugar, and the dragon is sculpted from modeling chocolate. The dragon eggs themselves are made from chocolate, and here’s the kicker: they have jelly snakes inside! 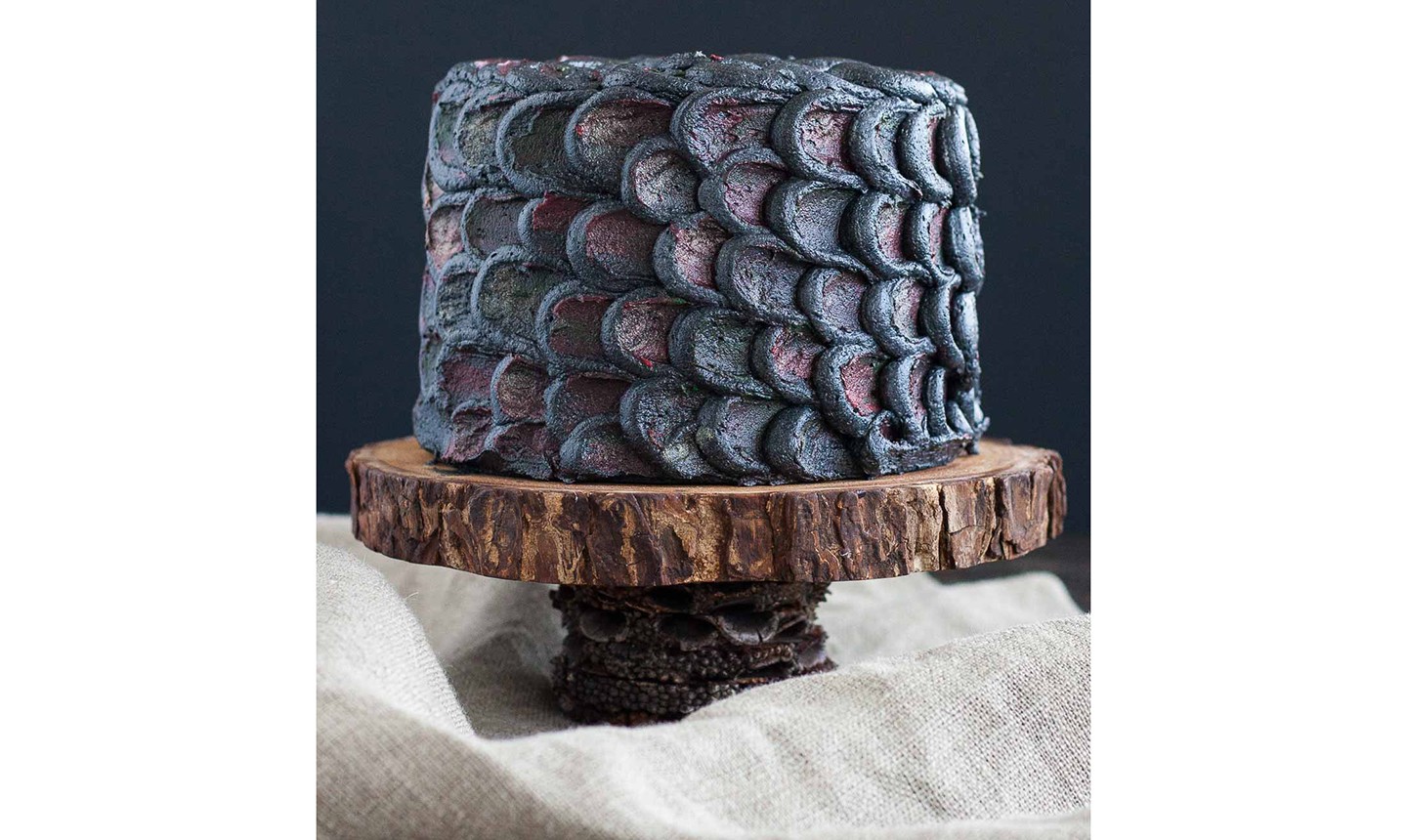 Photo via Liv For Cake

If you’re all about buttercream, this is the Game of Thrones cake for you. Blogger Liv For Cake has cleverly concocted a “dragon scale” effect by using creative color mixing and piping techniques. She swirled a little red and green buttercream into her gray, then piped buttercream into dots and spread it slightly, using an offset spatula to get this super-cool texture. A little gold pearl luster dust adds a final magical touch. 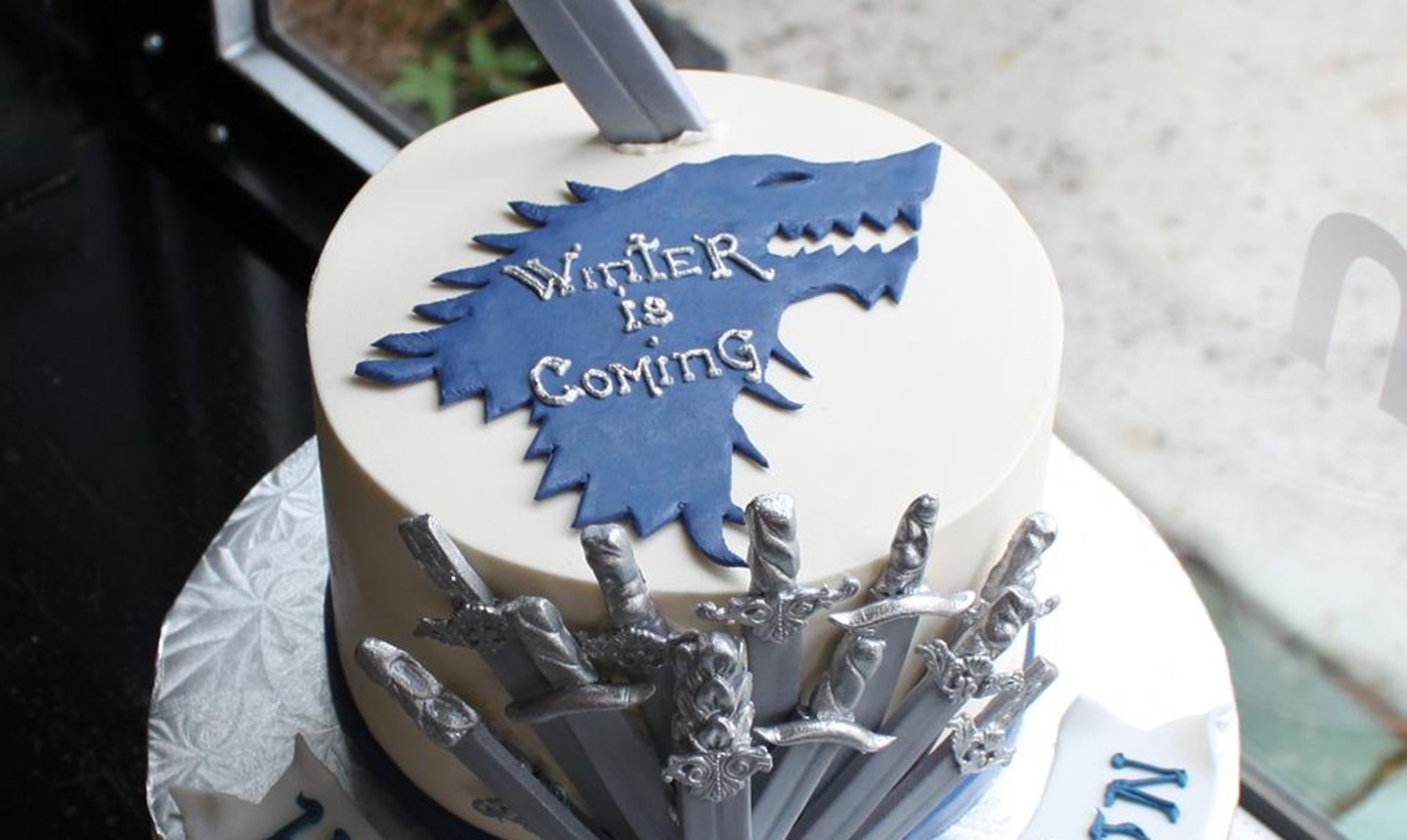 Philadelphia’s Whipped Bakeshop started this cake with a perfectly smooth layer of fondant . Then, the snow white canvas was topped with a fondant direwolf emblazoned with the show’s tag line “winter is coming,” and finished with handmade silvery swords. Fierce! 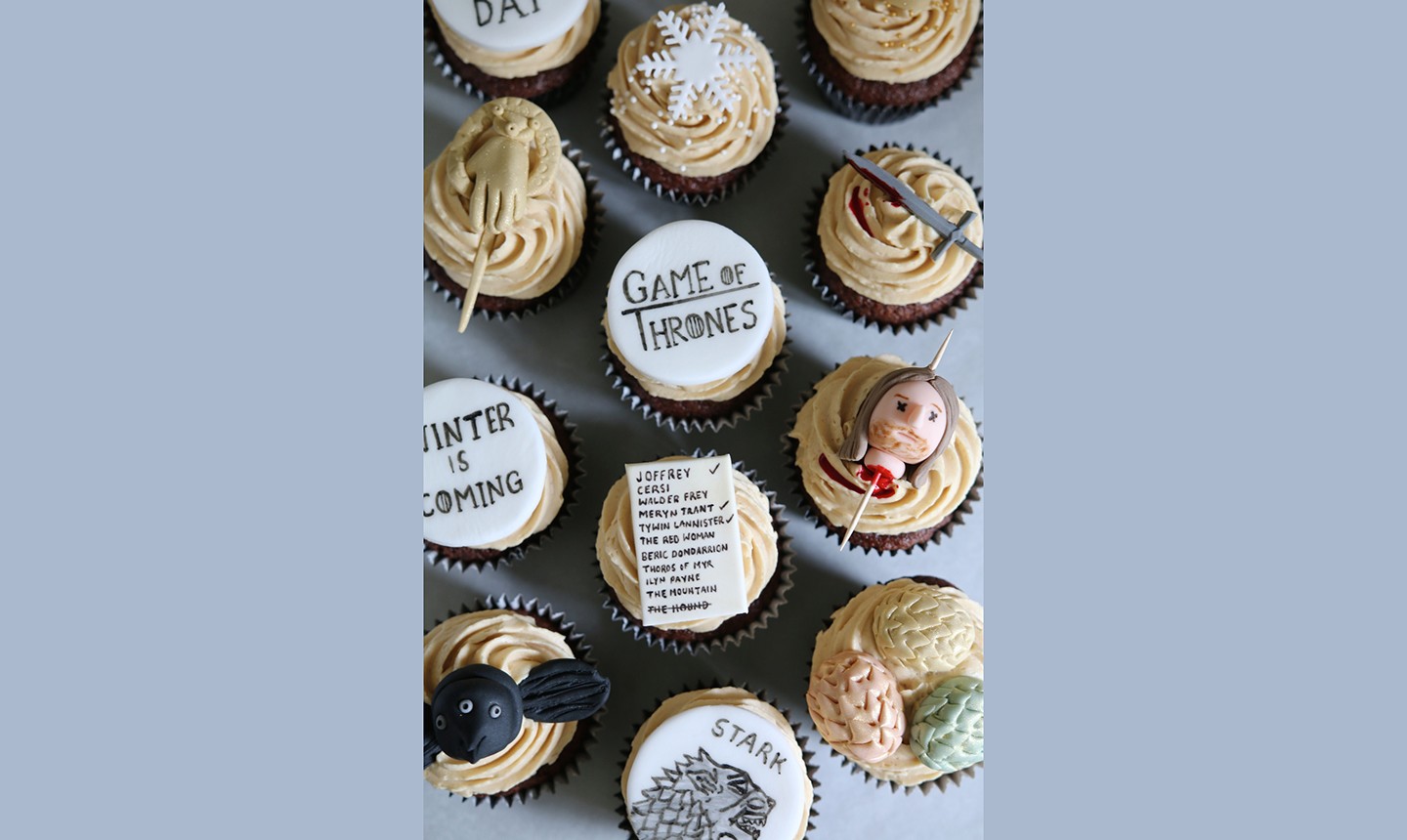 These clever cupcakes by U.K.-based decorator  Afternoon Crumbs feature a variety of handmade Game of Thrones toppers, including the Stark family seal, the “Hand of the King” pin motif, Arya Stark’s so-called “kill list,” dragon eggs and yes, even a disembodied head. The cupcakes themselves are chocolate, filled with salted caramel, and topped with peanut butter frosting, so they definitely taste as good as they look! 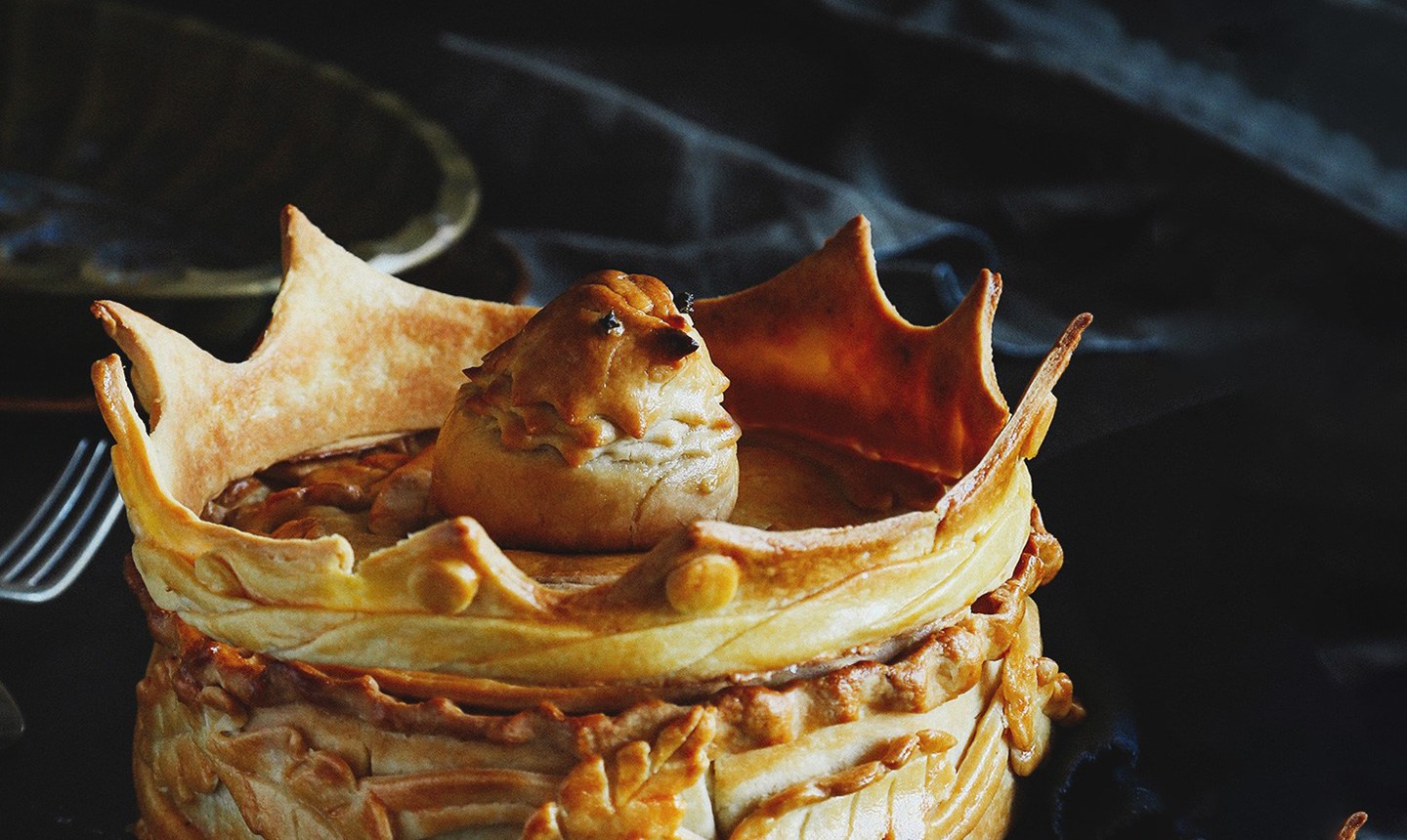 Photo via A Table For Two

Technically this one isn’t a cake, but it’s too impressive not to share! Loyal fans will remember the ginormous pigeon pie served at Joffrey’s wedding. This pie, featured on the Australian blog A Table For Two , is an homage to that pie (but with far more appetizing ingredients). Mushrooms, leeks, chicken stock, cream and spices make up the savory filling, which is wrapped in homemade pastry that’s been painstakingly molded to resemble the pigeon pie featured in the show. 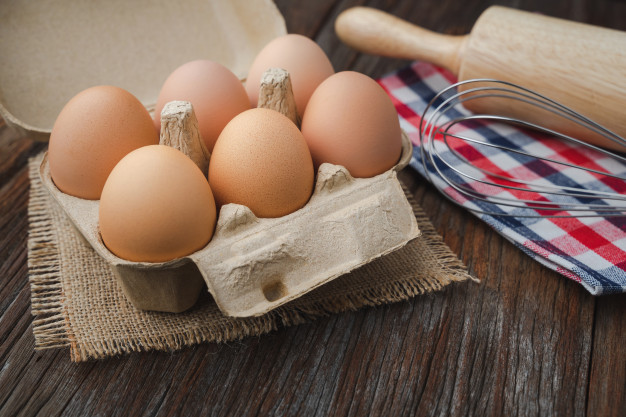 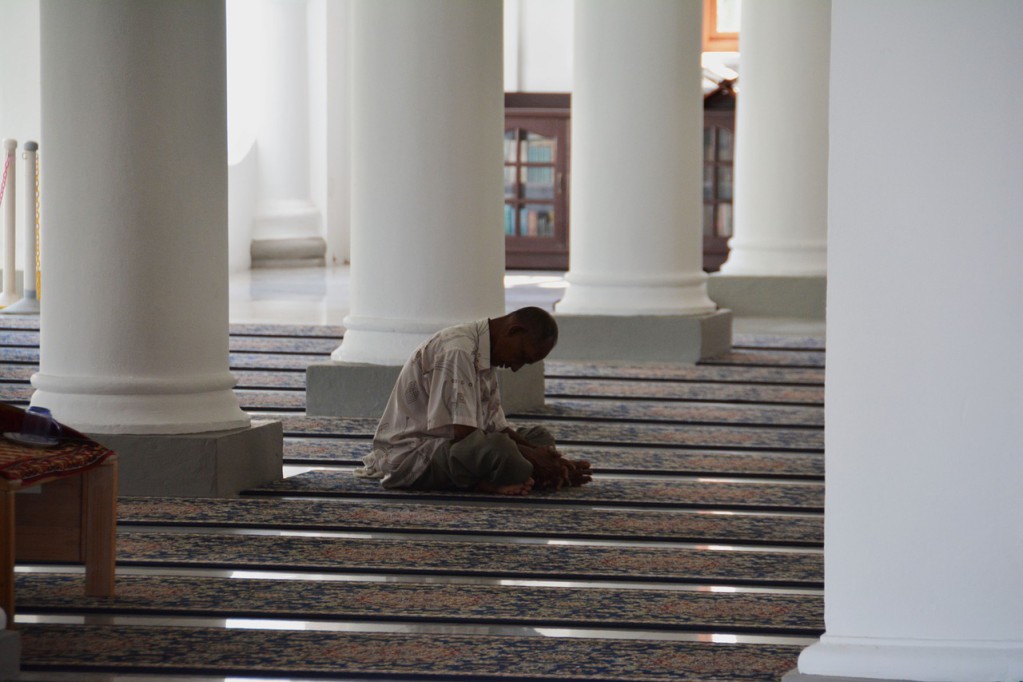 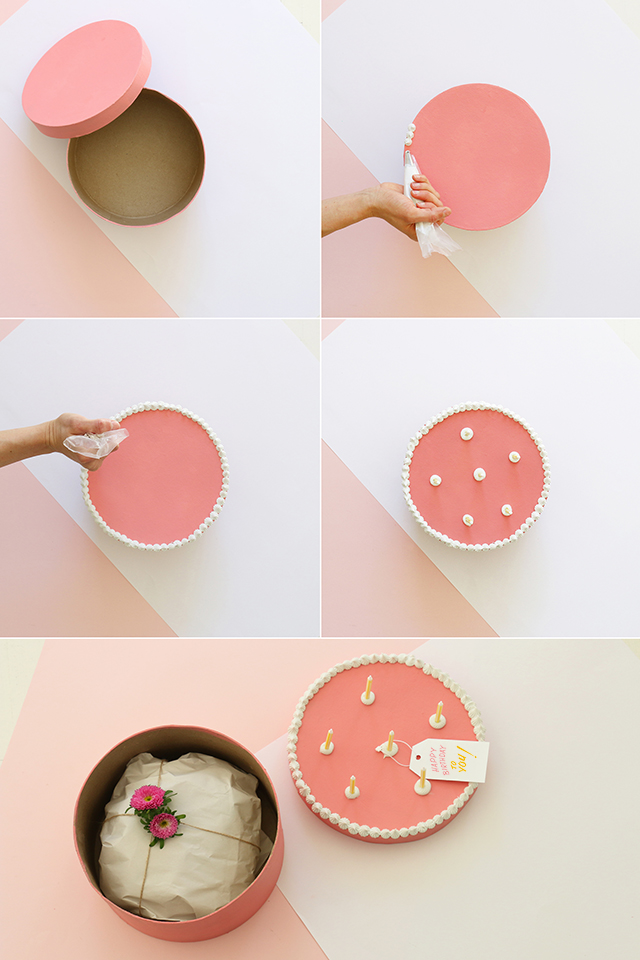 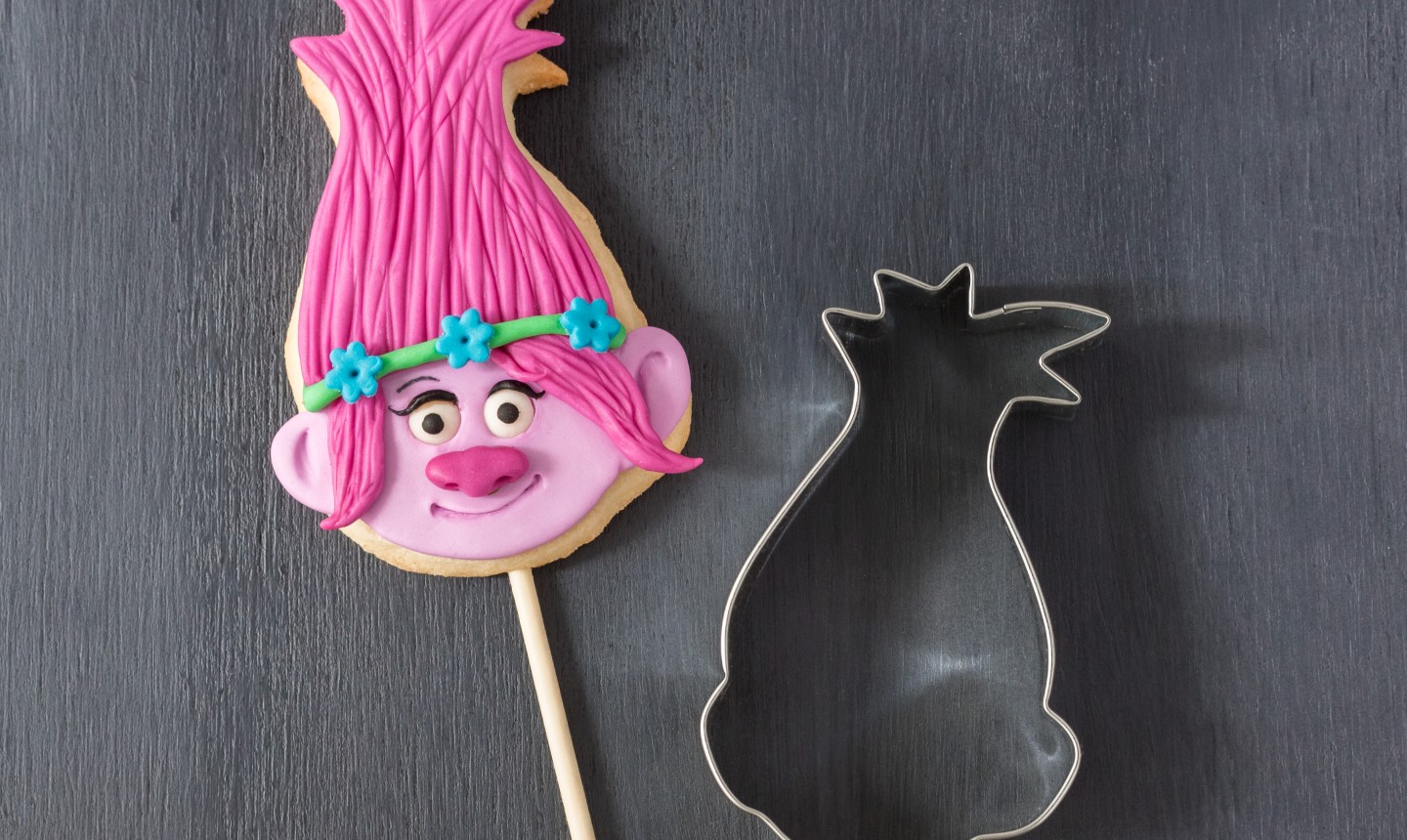 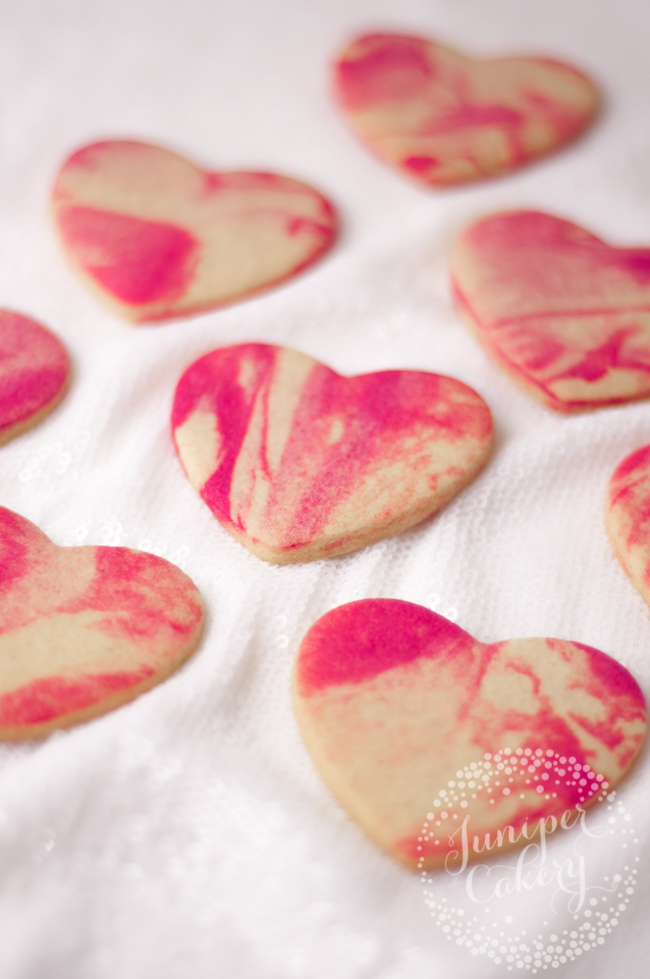 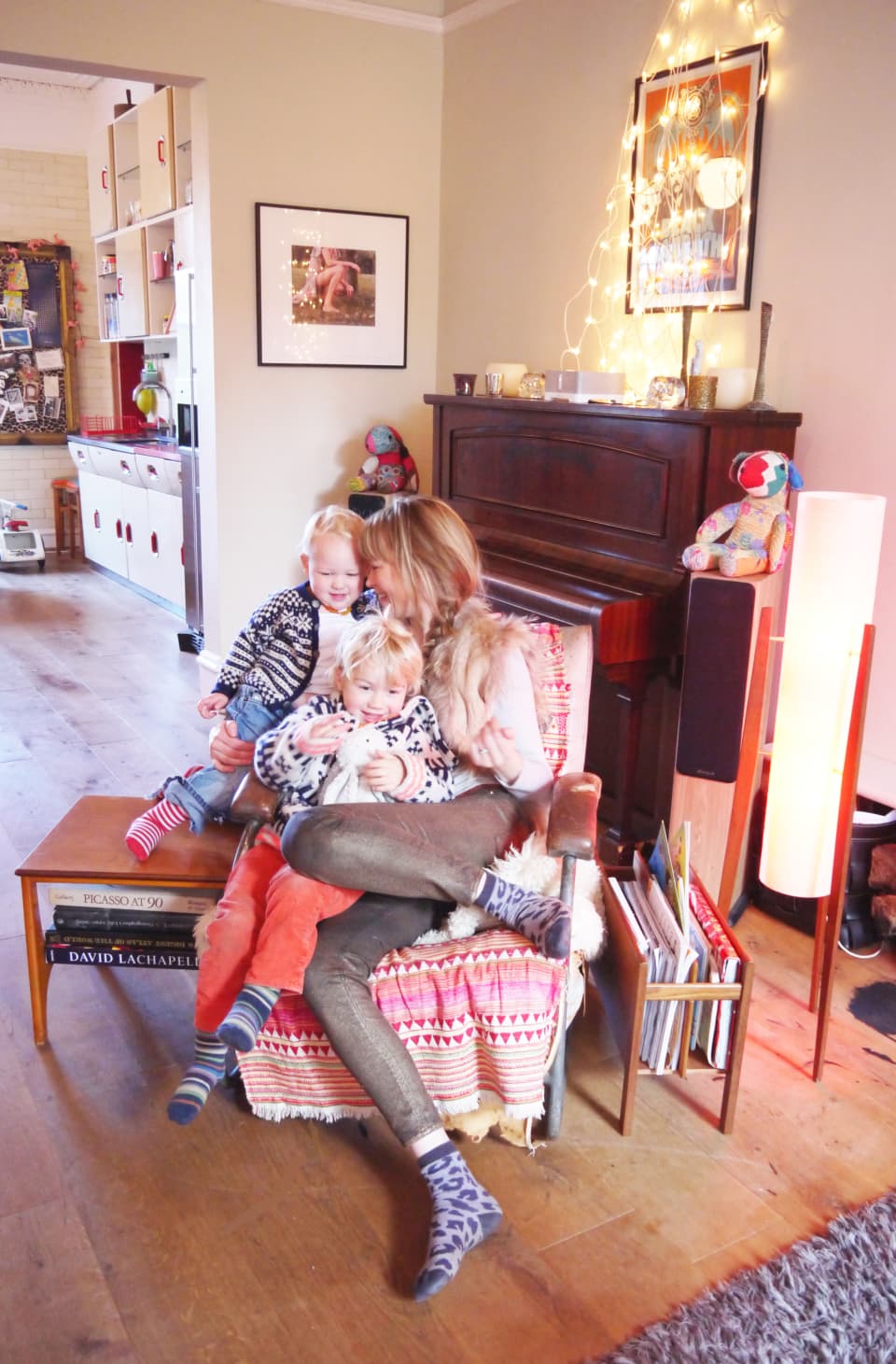 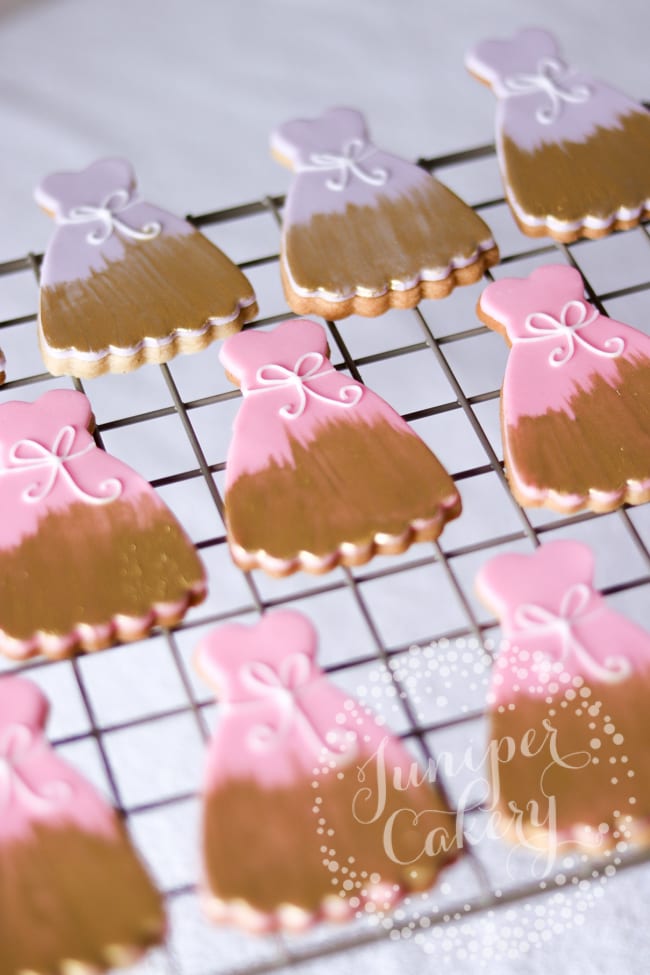 Sumber : https://shop.mybluprint.com/cake-decorating/article/store-decorated-cookies/ Baking and decorating cookies is fun, but running out of space when dealing